get him a body bag 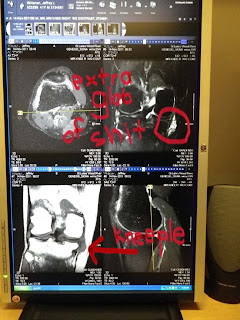 About 15 ski seasons ago I jacked my right knee on a mellow little 180. If I hadn't been only a couple lift towers away from the bottom I woulda had a tough time getting down. Doc told me I tore my MCL a tad and fucked up my meniscuss. No surgery needed, but did some extensive rehab with cold beers and sloth. It was already somewhere near the beginning of April, and I remember being beat up and ready to be done with the season anyway. That knee always had a slight stability issue ever since. Fast forward to around 2008 or 2009 in a random after-work muay thai class. I get asked to be a "dummy" for the final test of a krav maga class on their final night beat down. "it's pretty much noncontact, you'll just stand there" says the coach. Reluctantly I agree to hold a heavy pad, give slight resistance, and make dude use 1 specific technique to take me down and the attacker isn't going to deviate. Me stand flat foot. Me not expecting DIFFERENT FUCKING TECHNIQUE. Me taken out at right knee like "sweep the leg, Johnny". Knee never the same. Right knee swells up more and more. Turns out my meniscuss is one giant pussy that's torn and needs a reconstruction cuz it's seeping fluids out the side creating an excessive lump of shit that needs to go December 5. I predict the 6th is filled with narcotics and nothingness. Then allegedly, 2 weeks later, I'm back on snow.
Posted by El Hefe at 7:09 PM