One of the super rad things about Bali, and Indonesia in general, is the total devotion to scootering. Really there is no other way to get around. On the way out in the morning, grab a Absolute bottle or 2 of watered-down petrol and hit the road. Helmets for pussys. Death laughs around every corner and behind every truck that's hauling 40 foot lengths of rebar flopping around. Wacked out Aussies and clueless Germans zipping around at mach speed while passing in oncoming traffic with barely inches to spare and total disregard towards the tib/fib spiral fracture. Total fucking chaos. Everyone has the right of way at all times. Streets choked with stifling fumes, horns, shit, and rotten diseased dogs just waiting to end it all at the hands of your front wheel. "Ah DAMMMMM, that Euro chick is smoking hot!"....don't take your eyes off the road, stupid. Ah yes, it's the Island of the Gods. 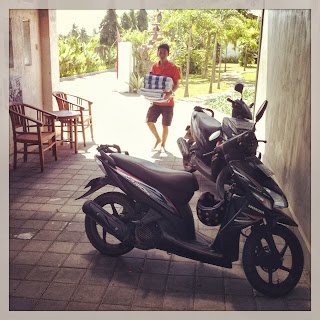