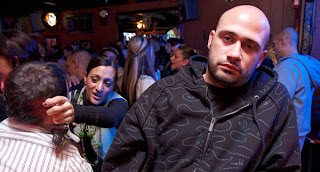 News report from The Onion...
NEW YORK—For the fifth straight year, Jordan McCabe will return home for the holidays and spend the night before Thanksgiving running into every smug and unlikable asshole he ever went to high school with, the 26-year-old reported Monday.
The trip back home, scheduled for later this week, will reportedly bring McCabe face-to-face with an endless string of pricks from his past, each of whom he will have to engage in awkward conversation, and generally pretend to be happy about seeing again.
"They're all going to be there," said McCabe, purchasing an Amtrak train ticket for Rochester, NY. "Every last one of them, just as shitty and conceited and phony as ever."
"I can't believe I'm going to see all those assholes again," McCabe continued.
Though he will initially intend to stay at home with his parents, grandparents, and other relatives, McCabe told reporters that after spending approximately five hours in their company, he will grow antsy, borrow his father's car, and drive to nearby Marleybone Pub. There, McCabe expects to bump into at least five insufferable assholes in the first three minutes.
"Guaranteed Ricky Cook will be there," said McCabe, adding that there isn't much else to do in his hometown. "And probably Vanessa Torres, and that dickhead Michael Schmidt. Yeah, Schimdt will definitely be there. Probably be hammered, too."
At Marleybone, McCabe will be required to partake in a number of unpleasant activities, including making small talk with several assholes who used to openly mock him during high school, and reminiscing about the "good old days" of which he was never a part. While the consumption of alcohol will initially make the evening more tolerable, McCabe is ultimately expected to leave the bar after realizing he has just as little in common with all these assholes as he did when he was 15.
"Katie Reynolds will probably come up and give me a big hug like we're the best of friends, even though she never once talked to me during school, and pretty much acted like I was invisible the whole time," McCabe said. "Boy, I can't wait to hug that bitch again."
After leaving Marleybone, the 26-year-old predicts he will patronize Bud Murphy's Tavern, a favorite haunt for locals, where an even greater number of assholes are expected to congregate in even higher densities.
Assholes such as Craig Horble, Kyle Davis, Vinny Iagosa, Brittany Pipitone, Justin Smigowski, Nick Casey, and Nick's asshole brother, Dennis.
According to McCabe, all the assholes in attendance will look the same except for being 10 to 20 pounds heavier, and possibly sporting a new beard or goatee. However, that same old shit-eating grin will still be on all their faces, McCabe reported.
If previous years are any indication, assholes who live in the area will not be the only ones out the night before Thanksgiving. Like McCabe, who since graduation has moved to New York, many Marshall High School alumni are expected to return from their new homes all across the country.
"I bet Bill Harding is going to show up and talk about his big lawyer job in San Francisco," McCabe said. "I can see it now: 'You know, hours are a real bitch. Money's good, though.' I've known that guy since fifth grade. He's always been an asshole."
Early reports indicate that the mingling of assholes will likely trigger a fight between the hours of 1 a.m. and 2 a.m., with a scuffle expected moments after two giant assholes argue over who rushed for more touchdowns during senior year. McCabe said that he usually tries to avoid any involvement in these fights, but nonetheless anticipates an elbow to his forehead or at the very least a spilled drink on his pants.
"[Wayne] Maldonado just loves to run his mouth, especially when it comes to talking shit about people's girlfriends," McCabe continued. "He used to be kind of scary when we were all in school, but the guy is almost 30 now. I feel kind of bad for him."
Though he remains anxious about the inevitable fracas, McCabe explained that those experiences are usually counterbalanced with more pleasurable events, such as finding out which assholes now have kids.
"I heard Marissa Feely got knocked up this year," he said. "What is that? The third time?"
The 26-year-old is not the only one dreading the upcoming week. Several Marshall High School alumni have expressed similar misgivings about running into former classmates on the night before Thanksgiving.
"I can't believe McCabe is coming back," said local resident Ricky Cook. "That guy's such a fuckin' asshole."
Posted by El Hefe at 8:00 AM