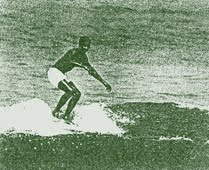 Dude's cool just standing next to a surf van... 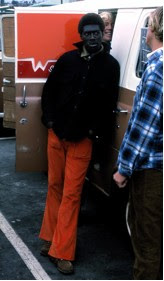 Have you ever noticed that there's not many brotha's surfing? Especially in SoCal. I'll be honest, I have. There's some Mexicans and randoms, but why so few African Americans? Whenever I see a non-honky in the water, I always notice. Not in any kind of Southern-Man kind of way. More of a "hey, nice, good to see some diversity, but that fucker better not snake me" way. Today, one of my web friends, Surfsista had a post on her site about the man who died at the Wedge during that massive swell last month. He was 50 year old brother with 42 years of body surfing skills. So sad. In the memorial paddle out pics, there's a man with a blacksurfing.com shirt. Rad. I forgot there was a Black Surfing organization. Hopefully it's like the National Brotherhood Of Skiers. They're a group that's working to get a black athlete on the podium in skiing at the Olympic level. Four words for them...Shaq, Slalom, & Crushing Gates. The Brotherhood takes over random ski towns every year. These annual trips bring about 2000-5000 strong to a predominantly rich/white/old/stale ski resort. If you've ever been there when it happens, it's fucking awesome. Not the greatest skiers, but they win gold medals at hootin and hollerin. The bars are way better dressed and WAAAAYYY more rowdy that week. Good times for all. I dunno what the reason for this posting is. Just that it would be cool to get yelled at and snaked by a more diverse range of dickheads.
Posted by El Hefe at 8:41 AM