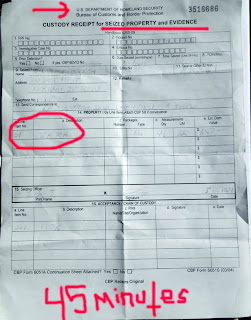 Consider yourself warned....DO NOT GO TO PERU, BUY COCA LEAF TEA AT THEIR GROCERY STORES FOR SOMETHING LIKE 75 CENTS PER 25 PACK, THEN TRY TO BRING YOUR STASH BACK TO THE GOOD OLD USA. Apparently, Homeland Security considers it in the same genre as cocaine, AKA The Peruvian Pinch. The Colombian Marching Powder. What a crock o' shit. Trust my deviated septum on this one kids, you ain't gonna Less Than Zero your butthole for some uplifting and soothing, and very delicious tea. No way, no how. Well, maybe. It's pretty damm good. No. NO DAMMIT! I said I was done with that. I won't do that again! Regardless, just don't bring the fucking Mate De Coca into this great country, alright? Some people who will remain anonymous have to learn the hard way. It's tough to tell from my receipt because Homeland Security can afford everything except carbon paper, but after getting up at 4am and flying for 10.5 hours, I was additionally detained for another 45 minutes at glorious LAX. It was okay because I got to watch them manhandle some little Asian dude who was bringing in Pee-Pee pills, a load of hiddden cash, and possibly illegal smut. They were going through his shit and grilling him like a hot dog on Memorial Day.

Luckily, when the dude asked where I was coming from, I replied Peru.
His next question was..."Oh yah? Do you have any coca tea?"
"Yep!" I said aloud, but inside I was thinking "FUCK! Shoulda ballooned it"
And with that he scribbled "COCA TEA" on my declaration and I was sent to Line B. As in BADASS.
They flat out stole my shit, filled out forms, scolded me, beat me with wilted celery, then sent me on my way.

I don't know what happened to Little Asian Man. I bolted for the exit faster than you can say Shawshank Redemption.
See you in Zihuatenajo, bitches.
Posted by El Hefe at 5:58 PM